One week ago, Bank of America warned that it had observed a sharp reversal to “increasingly euphoric sentiment” among its institutional, hedge fund and HNW clients, all of whom sold in the previous week even as stocks continued their grind higher. This happened around the time that Goldman’s Prime Brokerage had observed a startling streak as hedge funds sold stocks for 7 days out of 8, which prompted us to warn that a short squeeze was coming… we were right, because just a few days later the S&P was back at all time highs on – you guessed it – another whopping short squeeze.

But what about BofA’s “smart money” clients? Did the sharp reversal in “euphoric sentiment” reverse, and is everyone bullish again?

Not at all – according to the latest weekly client flow trends report from BofA’s Jill Carey Hall, bearish sentiment accelerated and for the second week in a row the bank’s clients were net sellers (-$2.0B) of US equities with net sales in both single stocks and ETFs (only the third time this year clients sold ETFs).

Not surprisingly, retail clients were the “least dumb money”, and according to BofA were once again the only client group to buy stocks,  albeit at the weakest level since mid Feb. 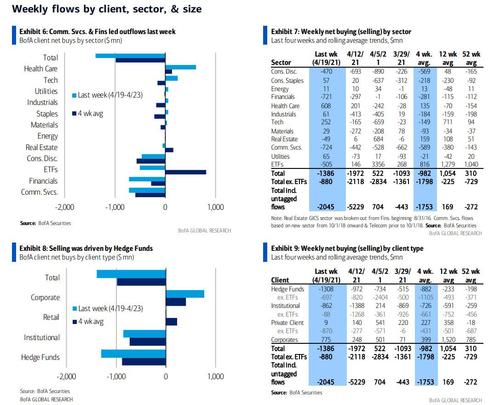 That said, retail clients have been net buyers for nine straight weeks as hedge funds and institutions have pared back. In fact, institutional clients sold stocks for the second week in a row while hedge fund clients, which led outflows, sold for the fourth week (largest outflow in over a month). 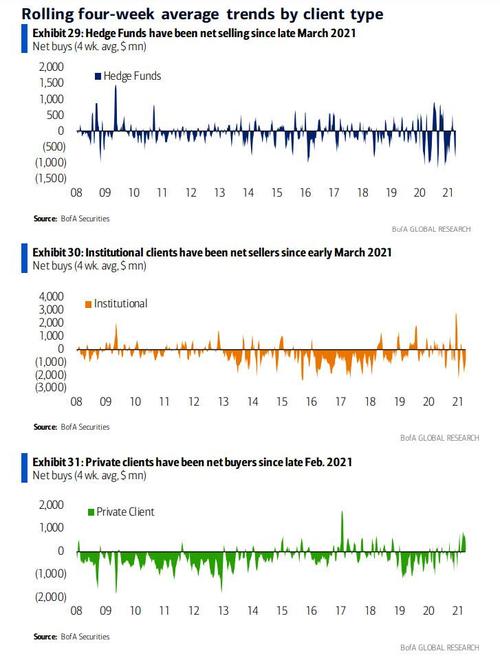 Considering the skepticism among institutions and hedge funds, it will hardly come as a surprise that what stock clients bought (and they were net buyers of seven of 11 sectors) it was led by defensives/growth (Health Care, Tech, and Utes), while net sales were largest in interest-rate sensitive sectors (Comm. Svcs. and Financials) as well as Cons. Disc.

That said, we may be on the cusp of a reversal: according to the bank, defensive vs cyclical flows have crossed above 1 std. dev. which typically coincides with peak defensive flows and a shift towards cyclicals.

Away from single stocks, BofA clients sold both Growth and Value ETFs with bigger outflows from Growth ETFs: this was the first weekly outflow from Value ETFs since mid-January. Some more details at the ETF level:

Clients were net buyers in five of 11 sector ETFs. Flows at the sector level were mixed into: 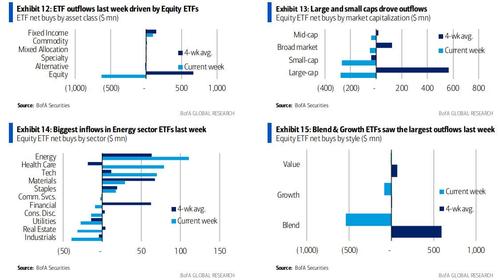 One final question: if most BofA clients were dumping, how did stocks rise to new all time highs? Simple: the same reason we listed in “The Catalyst For The Next Leg Higher: Buyback Blackout Period Just Ended” – according to BofA, buybacks accelerated vs the prior week and reached the highest level since the start of reporting season, driven by Fins. The easing of capital restrictions is one reason we’re bullish Fins. but we believe corporate cash priorities broadly may shift towards capex.

In short: we are back to the pre-QE market where it wasn’t Fed purchases as much as (debt funded) stock buybacks that provided the relentless dry powder pushing risk assets to all time highs. There is just one difference – not only do we have record buybacks but we also have $120BN in monthly Fed liquidity injections. We say that just in case someone is naive enough to actually short the manipulated policy tool once upon a time known as “the market.”

"They're Guessing" - Gundlach Rejects The Fed's "Inflation Is Transitory" Narrative