“Carpet-Bombing The Economy With Stimulus & Liquidity Is A Huge Mistake…”

The bond market might, however, assuming Kashkari’s  quote is true.

We are reposting a piece, which we recieved tremendous pushback when it was posted.   Now the Fed Heads are climbing aboard.  NK is one of the smartest but a bit of an opportunist, in our opinion.

Wall Street’s “everything is bullish” mantra is why the U.S. stock market cap to GDP is now close 200 percent (almost 50 percent above prior bubble peaks) and why we now see no way out of this rabbit hole but to print, print, print.   And print some more.

Asset valuations are so out whack, the Fed has lost control of the markets.  Just a hint of normalizing rates — a positive real interest rate across the curve — would cause stocks to correct 50 percent, in our opinion,  and throw us back into the “ice age.”

The policymakers are “up on a tightwire, one side is ice and one is fire.”    Ice as in deflation, fire as in hyperinflation,  the ultimate corner solution.  Write it down.

Ready For 4 Percent CPI By Mid-Year?

Origninal Posted on February 9, 2021 by macromon

Starting to hear lots of talk about inflation these days, something we have been seeing in the pipeline for the past six months.

Input price inflation accelerated to a near-decade high in January. Costs increased to the greatest extent since April 2011, reflecting stronger rises in both the manufacturing and service sectors. This was partly passed on to clients in the form of higher charges, the main factor underlying the steepest rise in output prices for 27 months. – JPMo Global PMI, January 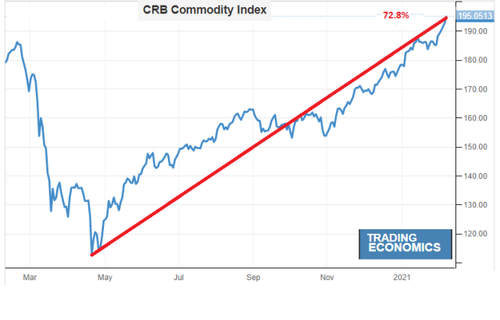 The surge in US inflation expectations continues unabated, highest since March 2013… pic.twitter.com/CIRBp4iur2

We’ve crunched a boatload of numbers over the past few days.  Sit back and enjoy.

Since 1957, 888 monthly observations of the Consumer Price Index, there have only been 106 monthly negative prints and only 12 negative monthly prints on Core CPI (excluding food and energy).    Monthly year-on-year inflation has only printed 40 times on the main CPI and Core CPI has never printed a negative year-on-year number.

You read that right, never.

Three consecutive negative monthly CPI prints are rare, only 15 times for main CPI and just once for Core, which happened just recently after the COVID shock.

The Coming Base Effect

The following FRED chart of the Consumer Price Index illustrates how it bottomed last May after the COVID shock, which is going to set up for some very high year-on-year CPI inflation prints by mid-year.  In part, because of the lower base but also the surprisingly quick snapback in the price index after the government temporarily shut off the lights and the Fed turned on the printing press.

We have constructed in the following chart a couple paths for CPI inflation in 2021, one based on an average 0.3 percent monthly rate, which takes the year-on-year inflation rate to 4.1 percent by May, which is sustained and translates to a core CPI of 3.5 percent.  Given what we currently see in the PMIs, including major problems in the global supply chain, and the excess stimulus already in the system, a 0.3 percent monthly CPI may be too stingy. 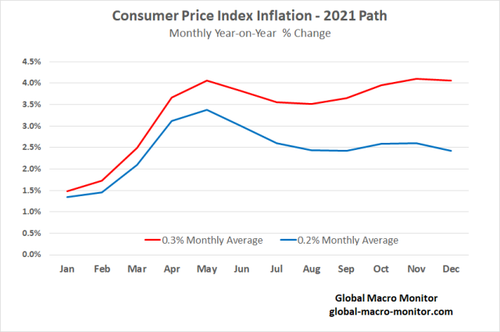 A Different Kind Of Economic Shock

We also think very few understand the current economic situation and that this crisis is unlike those in the recent past.  The labor force and employment problems are not so much the result of too little demand but a forced reduction in supply due to the COVID restrictions.  More than 70 percent of the 10 million jobs that have been lost and have not been recovered are in three sectors: 1) leisure and hospitality; 2)  education and health services, and 3) government. 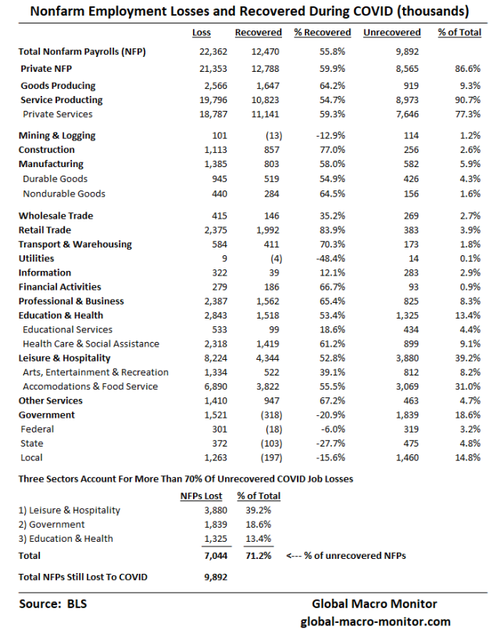 Once COVID begins to fade – it has already started – and the economy opens fully, pent-up demand, especially for leisure and hospitality will be huge, and with capacity already reduced in this area, hiring will rebound sharply and so will prices.

While crunching the numbers, we also found an interesting anomaly with AHE, which is now running at multi-year highs.  We have warned many times on this site about going deeper with the macro data and the problems of averaging. 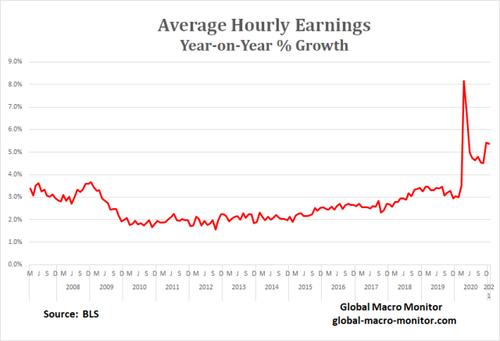 Though we have not engaged in much second-order thinking or analysis on this issue — you don’t pay us enough to do so — we are pretty certain the spike in earnings is the result that most of the job losses have been in the lower-paying service sector, such as leisure and hospitality.   If, for example, all the sub .250 hitters on the Yankees are given their walking papers, the team batting average naturally goes up.  The same goes for the macro.

We are also kind of amazed that those soaking up the sun at the genius bar on bubble vision are not using the “spike in AHE” as a rationale to justify the market’s irrational and outrageous valuations.  Maybe they will or already have?

Personally,  I have given up on the market, which has become almost farcical, well, not even almost.  One would think that if inflation is rising the Fed’s hands will be tied and there is a risk they may panic, or the bond market will panic first, which could send risk markets into a tailspin.   But that’s too rational.

We also know that we mortal humans tend to think linearly but markets, the economy, and society move forward on a nonlinear trajectory.  In other words, it impossible to predict the future, especially when it comes to timing.

Nevertheless, we still hold to the instruments and signals that have guided us in the past and continue to heed the words of one of our heroes,

In economics, things take longer to happen than you think they will, and then they happen faster than you thought they could. – Rudiger Dornbusch

Finally, I am thankful to my partner at GMM,  Carol K., who has taught me “you have got to ride the gravy train as long as it lasts.”    I guess you can tell who is making the money at the Global Macro Monitor.   Keep fighting, CK.

Carpet bombing the economy with stimulus and liquidity is a huge mistake and will end in a river of tears, in my opinion.   Surgical strikes to help the sectors most in need, please. 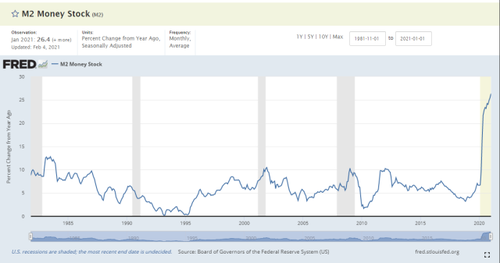 Inflation is always and everywhere a monetary phenomenon. – Milton Friedman