Goldman:”Don’t Fight The Fed” – The Fed Wants Higher Inflation, And It Will Get It

Summarizing investor sentiment in his Weekly Kickstart note, Goldman’s David Kostin writes that three macro issues dominated investor discussions about the US equity market since the start of the year: rates, inflation, and taxes.

Not surprisingly, interest rates have been the most important of these topics. In a rising interest rate environment, short duration outperforms long duration in both fixed income and equities and sure enough, of all Goldman thematic baskets, duration has been the best long-short trade, posting a +25% return since the start of 2021 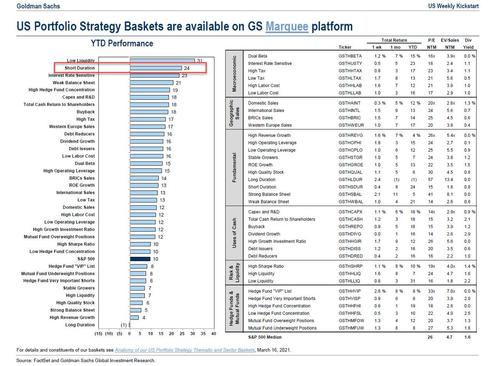 A sector-neutral portfolio of short duration stocks (GSTHSDUR) has climbed by +24% YTD compared with a -1% return for a long duration portfolio (GSTHLDUR). As Exhibit 1 shows, duration has been a major contributor to alpha generation. 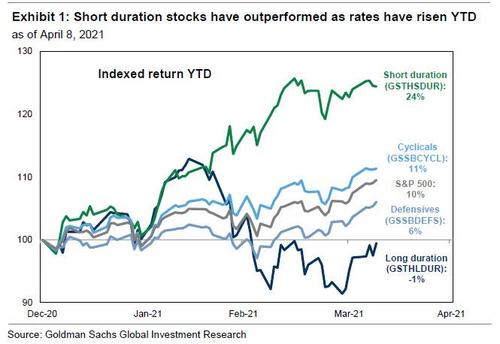 Looking ahead, Goldman expects more of the same: a static fed funds rate at the zero lower bound (until 2024 according to the Fed) combined with a continued rise in both real rates and breakeven inflation means a steeper yield curve. Meanwhile, amid expectations of historic economic overheating, Goldman predicts that GDP growth will peak in the current quarter at 10.5% and nominal rates may rise by another 15 bps to 1.8%. As such, short duration stocks should continue to outperform, which also means more weakness for tech names. However, according to Kostin, “some clients argue Treasury yields peaked at 1.75% at the end of March, and secular-growth Tech stocks will now outperform once again.” To be sure, that’s precisely what we have seen recently (read “Did The “Value Rotation” Just Die Again: Some Market Thoughts From Goldman“).

Kostin then takes us to the depths of financial market folklore and repeats what may be the single biggest cliche in all of finance: “Don’t fight the Fed” is a quip investors have learned to ignore at their peril.”

Why is this relevant? Because as Goldman notes next, “what the central bank wants is usually what it gets, sooner or later. A year ago, the Fed’s forceful intervention to backstop the money market sent both companies and fund managers a clear message about its willingness to provide liquidity. The Fed set a floor beneath equities and sparked the 80% rally that has lifted the S&P 500 to an all-time high.” (yes, that’s Goldman admitting the Fed is now in the stock market manipulation business, a claim which not long ago was made by the occasional “tinfoil-wearing” website such as this one, for which it got much abuse).

That said, stocks could go far higher, especially short duration stocks. After all, as Kostin repeats, “the Fed wants higher inflation. It has rejected pre-emptive tightening and instead under average inflation targeting wants core PCE inflation to average 2% over time. Core PCE averaged 1.45% year/year during the first two months of 2021. Although inflation readings are likely to be elevated during the next few months –peaking in April at 2.3% –it is likely to be transitory, and below 2.0% on a sustainable basis until 2023, according to the forecasts of our economics team.”

How do publicly-traded stocks fit into the inflation picture? According to Goldman (and Morgan Stanley) It is all about margins. 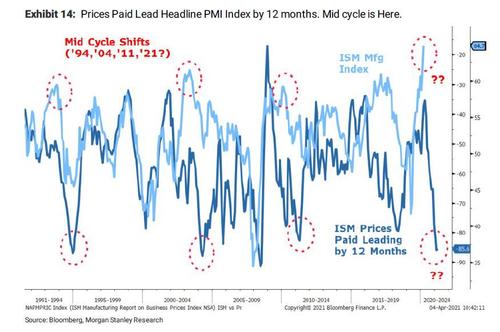 … Kostin notes that the Producer Price Index (PPI) segmented by stage of processing shows that raw materials inflation (year/year) equaled 9.3% in March 2021, the prices of intermediate goods rose by 4.0%, although finished goods inflation equaled only 1.3%. 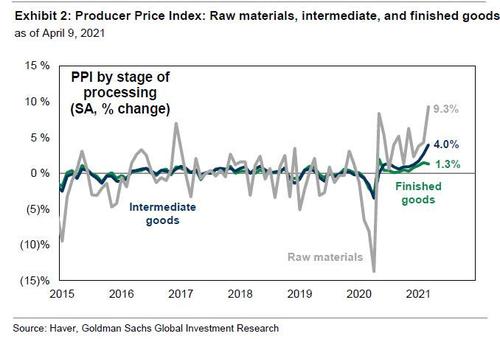 Based on his recent conversations with managements, firms are experiencing higher input costs stemming from supply chain disruptions, rising commodity prices, and increased labor costs. To be sure, increasingly more firms are defending margins by passing the higher costs along to their end market customers. KMB recently announced that effective in late June it will lift the net selling price of the majority of its North American consumer products in the “mid-to-high single digits.” But in the case of US auto manufacturers, the solid end demand environment that has allowed companies to cut incentives on limited inventory has been offset by margin headwinds related to production challenges, most notably the lack of semiconductors. Other cost pressures include higher shipping costs and manufacturing expenses related to factory downtime.

And so with margins squeezed, it’s will be all about the ability to pass through cost increases. Notably, this would be a reversal to the trend observed in the past year: as Goldman notes, firms with high pricing power sharply lagged during the past year and the huge valuation premium previously accorded these stocks has disappeared. That’s because firms with low pricing power have historically outperformed when S&P 500 profit margins expand, but that period is coming to an end as rising inflation will restrict some firms from boosting margins while firms with pricing power will benefit.

To find suitable investment candidates, Goldman screens for high and low pricing power stocks in the Russell 1000 based on the level and variability of each stock’s gross profit margins. The chart below lists 55 stocks with high pricing power. 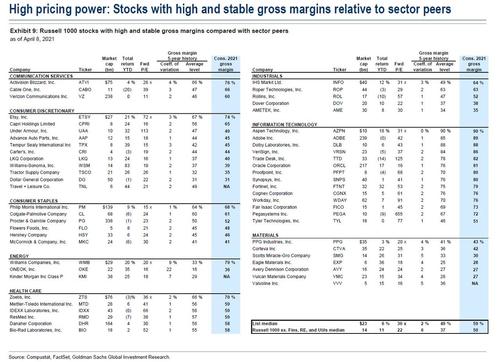