Since The Fed’s last statement and press conference (on March 17th), stocks and bonds are up marginally, gold has roundtripped back to unchanged (from a sizable loss) and the dollar is holding on to modest gains… 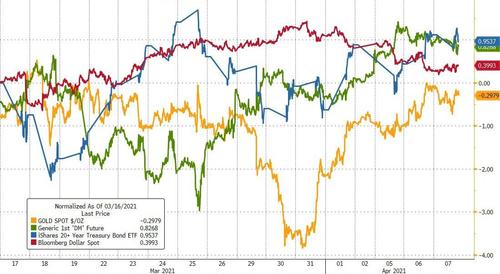 Interestingly, on the equity front, growth has dominated value as reflation themes fade… 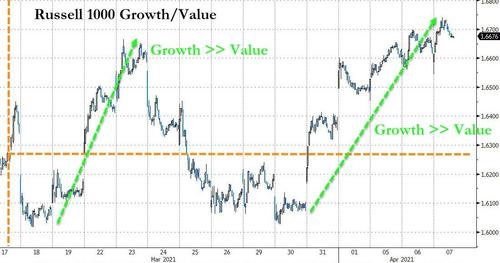 And Big-Tech has dominated Small Caps, back near 7-week highs relatively-speaking… 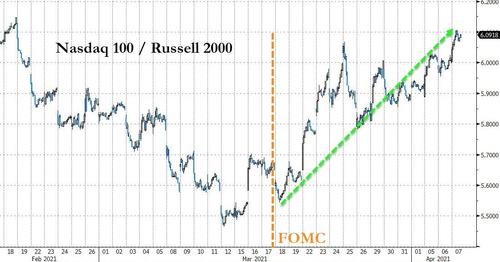 On the rates front, the market tightened significantly after the FOMC statement but has recently eased back as hopes for Biden’s stimulus malarkey faded a bit… 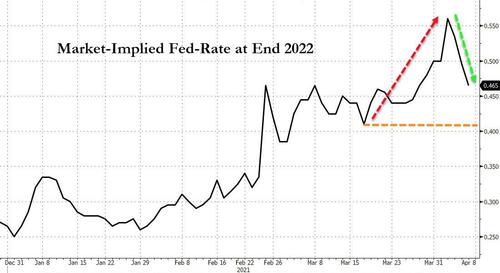 With all eyes on the latest FOMC Minutes for any signs of The Fed walking back any of its unprecedentedly easy policies, we note that Federal Reserve Bank of Dallas President Robert Kaplan warned today that “I do worry about excesses and imbalances,” adding that “failing to communicate Fed exit could stoke risk-taking,” adding that The Fed “should withdraw some accommodation once the pandemic is over.”

Additionally, San Francisco Fed’s Daly said today that The Fed “can ultimately return its balance sheet to more normal levels.” We doubt it. Daly also shares some optimism – in opposition to Powell’s more downbeat view that the situation is still dark  – saying that “though we are not through the pandemic yet, there is light at the end of the tunnel.”

The Fed has said it will start to slow asset purchases when there’s “substantial further progress” toward its employment and inflation goals.

Bloomberg Chief U.S. Economist Carl Riccadonna note that “with the Fed firmly on hold, the utility of the minutes will be concentrated toward gleaning clues on policy makers’ preconditions to commence tapering asset purchases. We expect the Fed to develop a clearer framework for dialing back purchases around midyear, but actual tapering will not commence until 2022.”

So what will The Fed choose to share in the Minutes?

The Fed has said it will start to slow asset purchases when there’s “substantial further progress” toward its employment and inflation goals, and the Minutes confirmed that Fed officials see “more time” before the “substantial progress” had been made.

“Participants noted that it would likely be some time until substantial further progress toward the Committee’s maximum-employment and price-stability goals would be realized and that, consistent with the Committee’s outcome-based guidance, asset purchases would continue at least at the current pace until then.”

There was some optimism around vaccinations and fiscal stimulus:

“Participants anticipated consumer spending would be bolstered by the recently enacted fiscal stimulus packages as well as by accommodative monetary policy. Many participants also pointed to the elevated level of household savings and judged that the release of pent-up demand could boost consumption growth further as social distancing waned.”

But as usual they quickly assuaged that by warning of downsides…

“While generally acknowledging that the medium-term outlook for real GDP growth and employment had improved, participants continued to see the uncertainty surrounding that outlook as elevated.”

The Fed brushed off the rise in yields:

“Participants commented on the notable rise in longer-term Treasury yields that occurred over the intermeeting period and generally viewed it as reflecting the improved economic outlook, some firming in inflation expectations, and expectations for increased Treasury debt issuance.”

There were “sizable increases in sovereign yields in advanced foreign economies.”

And as far as the bond-buying malarkey, it appears they won’t be changing their plans anytime soon…

“Participants noted ‘a benefit of the outcome-based guidance was that it did not need to be recalibrated often in response to incoming data or the evolving outlook.’”

However, a couple of officials were worried that easy financial conditions were raising stability risks.

“…a couple of participants expressed concern that highly accommodative financial conditions could lead to excessive risk-taking and the buildup of financial imbalances.”

Some Fed officials did warn of a post-pandemic hangover from the commercial and residential real estate bailouts being removed.

Interestingly, the minutes hinted at the reaction function and the fact that it will be based on hard data… and not simply guesses and forecasts… which could suggest The Fed will be well behind the curve if/when inflation starts to accelerate due to the lagged effects of fiscal policy.

In particular, various participants noted that changes in the path of policy should be based primarily on observed outcomes rather than forecasts.

For now markets seem much more focused on the tax implications of President Joe Biden’s proposed $2.25 trillion infrastructure plan, and how that might impact U.S. growth.