Vaccination passports are being pitched as the new “golden ticket” in a dystopic post-COVID world if you want to travel – now that the recovery is on its way.

Countries in Europe are already requiring travelers to use vaccine passports – usually taking the form of certificates or digital cards of past COVID tests and vaccination history – an idea catching on in tourist nations like Thailand and the Caribbean. But also, much closer to home, Hawaii state officials are considering steps to implement vaccine passports for inter-island travel and likely one day require, to some degree, out of state travelers to have a health passport to revive the local economy that has sustained severe economic damage in its tourism and travel industry.

Local news KHON2 said state officials could soon roll out a health passport app that details vaccination history. Lt. Gov. Josh Green confirmed an app is in development called “First Vitals.” Officials have discouraged inter-island travel as the U.S.’s only archipelago state composed of eight islands in the North Pacific Ocean was forced to deal with a massive influx of travelers from outside the state during the pandemic. Many folks who flocked to Hawaii were escaping the pandemic or took advantage of cheap flights.

Like existing COVID passes issued by other countries, Hawaii’s vaccine passport will provide officials with a QR code to authenticate the users’ vaccination history. 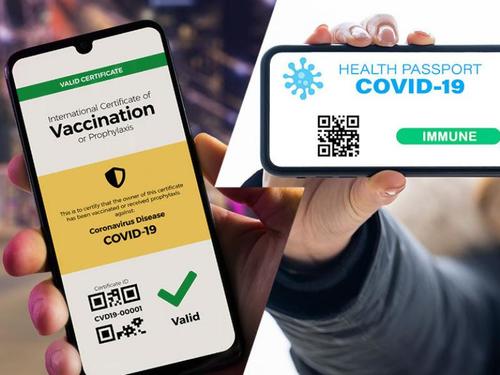 “They would be able to verify the health record, they would then encrypt it so people can’t steal someone’s health record. Although really, all it is is whether you got vaccinated or not and your name and the date it occurred,” said Green.

Now that Hawaiian residents are getting vaccinated, inter-island travel is set to increase this year. Health passports could be what revives the state’s tourism industry.

“That’s what we see, families that haven’t seen each other for a while that live in Kauai, Maui, Hawaii Island, Oahu. And this will allow that kind of travel to take place without the additional cost of being tested,” said Mufi Hannemann, president and CEO of the Hawaii Lodging and Tourism Association.

Green said a pilot test of the new vaccine app for inter-island travel could happen in the next couple of weeks. “I think that makes a lot of sense. It would immediately empower probably about half of our travelers inside the islands to travel safely,” he said.

On a national level, vaccine passports could soon become a reality. The Biden administration said earlier this week that the private sector would be in charge of developing digital passports.

We have documented the increased rollout of digital proof of vaccination. The International Air Transport Association recently said a new travel app (called Travel Pass) would be rolled out for airline travelers worldwide.

Since the early days of the pandemic (read: here & here & here), we’ve discussed “COVID passports,” “immunity passports,” or at least mentioned those who don’t get tested for the virus or vaccinated could face travel restrictions.

… and here come the global vaccine passports as overreaching governments and greedy corporations are getting their noses in your medical records and will decide if you can travel or not based on vaccinations and or test results.

Did The NFT Boom Just Burst?